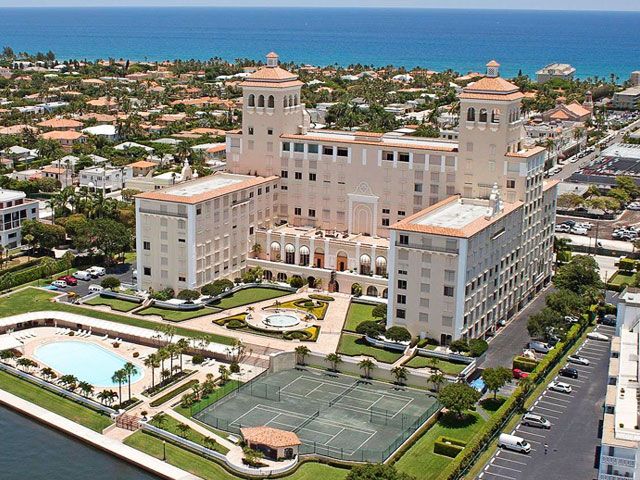 Actual maintenance per unit may vary

For Sale
For Rent

Pending Sales in Palm Beach Biltmore These are recent sales that have not closed. The final sales prace will be published after the property closed.
0 for Rent

It hasn’t always been known as the Biltmore. It acquired that name sometime after the namesake of the original hotel ducked out on his courteous duty. Built in 1925 as the Alba Hotel, the structure was named in honor of the Spanish nobleman, the Duke of Alba.

The elegant hotel is fit for a King or a Duke or a socialite. The sprawling structure contains 543 rooms and when it was opened in 1927 it was reported to have cost $7 million.
Since then, the Biltmore has gone through successive receiverships. It was used by the U.S. Coast Guard in 1943 and 1944 as a SPAR training base, and it served the U.S. Navy in 1945 as a hospital.

In 1962 the Biltmore was purchased by the R. H. Weissberg Corporation at a reported price of $4.3 million. When the corporation declared bankruptcy in December 1967, Lord Baltimore, Inc. took over the operation of the hotel under the trusteeship of the federal court in Chicago. The hostelry figured in further court suits in 1970.

In its hey-day, the Biltmore rated with Henry Flagler’s The Breakers and other great hotels on the gold coast as "exciting."

There is a rumor on the island of Palm Beach that if money grew on trees, nobody would bother to pick it. Exaggerated that might be, but there is no dispute that the town is America’s most fabled home of the millionaire.

The data relating to real estate for sale and rent on this website comes from the South East Florida Regional MLS and is provided here for consumers' personal, non-commercial use. It may not be used for any purpose other than to identify prospective properties consumers may be interested in purchasing or leasing. Data provided is deemed reliable but not guaranteed. This website is courtesy of Miami Residence Realty.